A month ago, I was engrossed in packing all the supplies for a stage race that usually fit into a truck in the hatchback of a Volkswagen Passat — no easy feat! We were preparing to head out to Zeeland, the coastal westernmost province of the Netherlands made up of several islands and a narrow strip of land bordering Belgium for the Junioren Driedaagse Axel: Three Days of Axel. Axel is the kind of race that riders treat with equal parts love and hate: the road conditions are narrow and uncompromisingly rough, the wind is constant and punishing, and the huge field of riders makes the competition fierce and dangerous. We started 5 riders who would take on a 100 km road race the first day, a technical time trial the next morning followed by another 100 km road race in the afternoon, and another 100 km road race the following morning with 3 circuits featuring 6 major climbs. Axel is like hitting your toe with a hammer to quell a hurt thumb; it will make any other race seem mild in comparison.

As soon as we arrived at the race lodging in Sas van Gent, I went to work finishing up bottle prep, making some race food, and dishing up the enormous pot of pasta salad I had made the night before. Having a captive audience of perpetually starving young elite athletes is a really great way to boost one’s self-esteem as a cook — there isn’t much that they won’t inhale with considerable gusto, especially when it features a high percentage of carbohydrates. The first stage was a late start in the nearby town of Sluiskil. The mechanic and I drove together while the riders made the short 7 km trip to the start by bike. I had been studying the technical guide for days and had a rough idea of where the race route would progress, although it was by far the most incomprehensible race bible I have yet to encounter (in Dutch and Flemish, with some sections helpfully translated into French…provided that one actually speaks French). I had a suitable feed zone picked out that would permit me to feed the riders twice, after the 50 km point and again when they looped back around 68 km — well within the UCI permissible range for feeding. I found my way with the Hot Tubes Development Team race support vehicle in tow, which was wonderful to have a feed zone buddy (and she gave me the best almond cookie I have ever tasted!). We fiddled with the race radio on my car and tuned in, which was really neat to get an idea of where they were on the course in real time and every move afoot in the peloton.

I headed out on the course with a musette full of bottles ready for the first time riders would come through, and was stopped by a race official on a moto who emphatically told me that I was outside the feed zone and that our team would be disqualified if the jury or commissaire caught me feeding my riders. It was a confusing claim, because no allotted feed zone was marked anywhere on the course map in the race bible and not wanting to be the reason our team encountered a problem with the race organizers, I withheld bottles from my riders as they passed (who gave me some very confused and abashed looks).

I headed back to the car so I could find this mythical feed zone for their next pass through, and was shocked to discover that running the race radio, even for a relatively short time, had sapped the battery and I couldn’t start my car. I quickly improvised by throwing all the riders’ gear, chairs, and nutrition in the Hot Tubes team van and getting a ride to the feed zone (which was in a terrible spot, just terrible!), and then back to the race finish.

For a less than smooth race on my part, we got it done — all 5 riders finished with one contesting the sprint for top 10, found their way back to their chairs and their bags, and the mechanic and I got back to my car while a really nice Dutch family came out with jumper cables to help us out (I gave them as many bike bottles as I could spare!). With relatively minimal chaos, we made it back to the race dinner location — another “epicurean journey through purgatory,” as our director so eloquently described it — and I told the director about the feed zone confusion. He informed me that it was a totally bogus threat the official had made and that teams were feeding all over the course, even before it was officially open for feeding, with no repercussions from the jury or commissaire. It’s hard to say whether the official was just being overzealous, or if I was possibly targeted for being a non-European; it does happen, although less often now than in the early days of US racing in Europe. Whatever the cause, I vowed to be exceedingly diligent with feeding in race-approved areas for the remainder of the race.

The next day was another double stage, with a short but highly technical time trial in the morning and a long road race stage in the afternoon. Our best-laid plans to arrive in ample time before the first rider’s start time were somewhat foiled by a bridge closing; the only other possible detour route crossed a drawbridge, which had just gone up to allow a ship to pass when we got to it. We still arrived at the start in enough time for the first rider to warm up, and he posted the fasted time on our team of the day: 7 km in 10:04.

Double stages usually don’t feature a road race long enough for a feed zone, but Axel was an exception; at barely under 100 km, I would have 2 opportunities to feed the riders before the finish. The course looped down the same road several times, so I got a chance to take a few pictures before feeding was open (and inadvertently caught a crash on film). 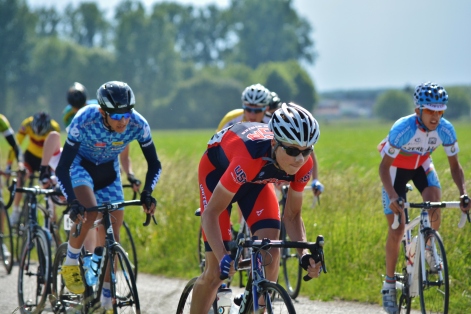 After the second feed zone, one of my riders rolled up bleeding and shaking his head — he’d had a crash on the cobbles and hit his knee and shin hard, unable to finish the race. I patched up his cuts and we loaded up his bike to head back to the finish. When we arrived at the van, another rider was already there — huddled up against the side of the wheel well against the cold damp wind. He didn’t have any visible injuries but reported that he had crashed out on a cobbled section and bagged it after the first lap through the finishing circuit. I’ve started to learn that a crashed rider doesn’t need sympathy; he needs care necessary for cuts and bruises but painful emotions are often better when given some space and interaction with the rest of the team.

That evening held massages and recovery for the three remaining riders who would be starting the race tomorrow, and a bit of personal good news. I had been doing everything I could to stay focused on the job at hand and not become discouraged that this would be my last race day working with USA Cycling in Europe. That night I got an email from the director with an official invitation to work the Tour de l’Abitibi in Quebec in July, and to come straight back to Sittard for the kermesse racing block and stay through Grand Prix Rubiliand in September. I was ecstatic, with the only caveat of having to break the news to my boyfriend and my mom/dogsitter (they took it really well though!)

The last stage of Axel was a three-lap course with three major climbs and four sets of cobblestone stretches. With only three riders starting, I had two helpers to hand off bottles and a lot of down time for more pictures on the first non-feeding lap. 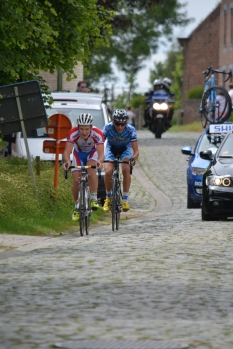 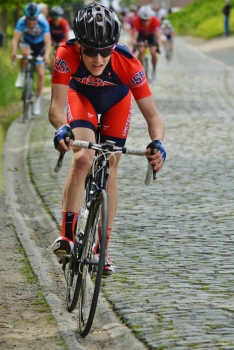 The remaining three riders fought it out and finished strong, with our top placed rider coming in at 14th in overall GC. One rider crashed on the cobbles in the last 3k and rode in with no broken skin but with bruises starting to blossom; he lamented, “I don’t even get a cool scar!” After much scrambling around exchanging riders and equipment with the Hot Tubes team, we were on the road back to Sittard.

This was a moment I had been dreading for weeks, because it marked the end of my last race with USAC in Europe and I was sad to see this amazing chapter of my life come to a close. Instead of melancholy, it was relief and joy that I would get a bit of a respite and time with my loved ones before heading back for another round of racing in July. I have found a career that feels more meaningful than anything I have ever done in my life; this is a feeling that can’t be replaced, and I am committed to chasing it to becoming the best soigneur I can possibly be.

I am so excited about this amazing opportunity to continue doing this crazy job. I could never have dreamed that I would become so taken with a career that could take me from washing a truck to 50 kph feed zones to emergency first aid and cooking dinner all in one day. As I write, my living room is full of boxes of bottles and nutrition products to transport to Canada in my little Honda Fit mobile service course, as we embark on the next great race adventure.

I owe a huge debt of gratitude to my family and my friends, whose tremendous support has made this journey possible for me. My mother and my wonderful boyfriend held down the fort at our house, kept my dog entertained, watered my garden, and sent their love over Facetime (when the wifi was good enough). My friends checked in and kept in touch, lifted my spirits and gave me confidence on the rough days, celebrated with me, and laughed along with me at my stories of surreal experiences. My employers at E3: Elite Human Performance have been incredibly supportive of my pursuits, and I have enjoyed sharing my insights into elite sports with my coworkers and clients.

Next stop: Amos, Quebec! Watch this space for more reports of the outrageousness of the Tour de l’Abitibi, coming up July 21-26.

This entry was posted on July 10, 2014 by saraclawson. It was filed under Uncategorized and was tagged with Axel, career, cycling, soigneur, sports medicine, stage race, training, travel, USA cycling.